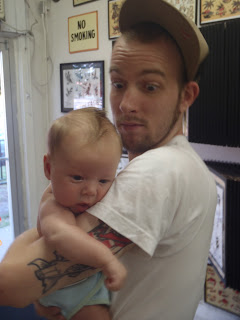 its odd when things that you are thinking of in the back of your head surface...... do you ever have that?where you are kicking around this thought back and forth in your head... not seriously.. just entertaining the idea..from time to time and with no goal..... and then without choice it comes up in your life... possibly making you approach the idea slightly different but more motivated now that the idea is clearer... like perhaps there is some other conscience pointing you in a direction you wouldnt figure out on your own...im glad i have the friends i do... they are great..they make me smarter than i am and offer many perspectives that i would not see....thanks freinds you know who you are.....and thanks chris showalter for the enlightened look at the 3 stages... i am proud to have such wise friends 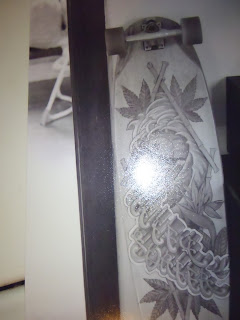 it was an awesome experience to help put together last years skateboard show GET RAD i wish i had more time to be a part of it this year.... while i havent had  much time to skateboard this summer with our new sons arrival  i still have been riding to work almost everyday... it is great fun i often times think about a statement bruce lee made..... and although i dont look at the city as my enemy i do think of it often like the ocean... bruce lee said.... "where my enemy expands i contract and where my enemy contracts i expand"..... this is very fitting if you have ever ridden down town in traffic late for work..haha

anyway i would like to take this chance to announce i have officially decided to do another show...... the idea for this show has been festering in my head for quite some time... and as per todays conversation i think that i have a direction  that i feel comfortable taking it... no not all of it is worked out in my head and im sure there will be many more insane and enlightening conversations to be had on pattie street..... no im not going to give to many details... everybody loves surprises,,,, the official press release reads something like this...

what...OFF THE WALL- in defense of tattoo flash, an educated look
where....?
who.... tattooers local far dead alive
when... sometime in the next year i will make no dead lines i am more concerned with the show being perfect than rushing to try to fit a schedule.....if it takes longer than a year to put together than so be it
why... to protect the life blood of tattooing ... to educate so people understand what they are seeing.... to show the beauty that is sadly overlooked by the modern day tattoo collector

....i refuse to let swallows fall to the grace of the google bird 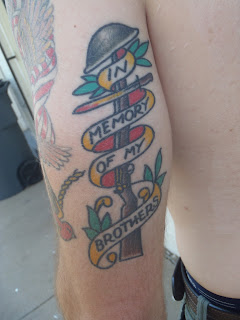 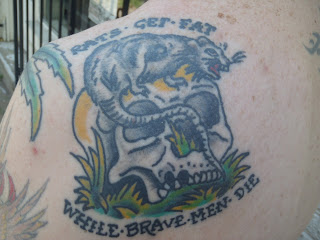 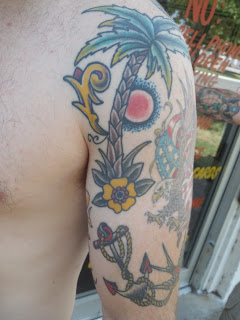 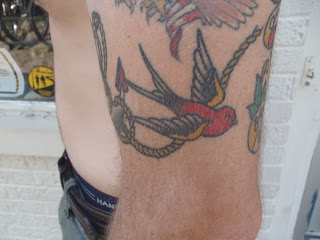 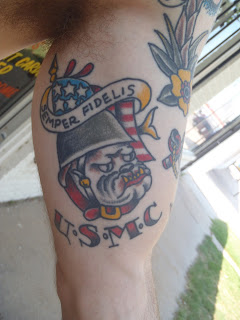 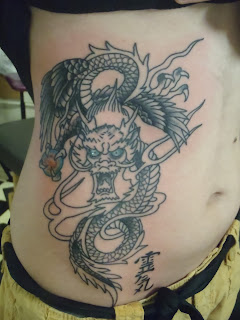 anyway a picture of my son and chris from notes and noises and a few tattoos i did last year that i got photos of today... o and a super fun hardy dragon i was blessed with last week..

Posted by red sea tattoo at 9:51 PM No comments: 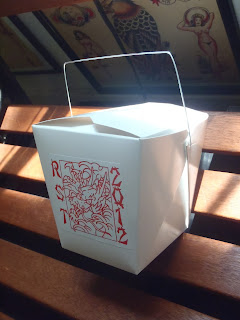 INSPIRATION: Im always jealous whenever i see other tattoo shirts..... one of the hardest things for me is choosing just one design to put on a shirt... how can i choose just one... what tattooee design says red sea tattoo... hmm i dont know ... what design is my brand? i dont know that either... whenever  i see a tattoo shirt i always think... how did they decide on that image ,what was their thought process....... i like doing shirts but like tattoo designs its hard to pick just one ..  i was thinking awhile back how if i was a pizza place it would be so easy to draw a shirt design i mean i do appreciate some pizza drawings (thanks dallis) .... god bless pizza but if you know me you know that i have an affinity for chinese food... i could get chinese food every day of the week if my wife would just agree.... i have been accused of liking even the worst of chinese food..... dont get me wrong i like the good stuff to but its hard to go wrong with some sweet and sour sauce on pretty much anything....mmm and crab rangoons.... arrggg well i guess i know what im eating for lunch.... anyway im getting a bit side tracked....so the shirts... its the year of the dragon the year my son was born i wanted to celebrate this but not with a typical tattooee looking tshirt ... so i thought if red sea tattoo was a chinese restaurant what would our t shirts look like... if a red sea tattoo chinese food delivery boy showed up at your house what would the shirt he was wearing look like....i will be a monkeys uncle if i dont think i nailed it... these are my favorite shirts of all time.. i havent worn to many of my shirts i have made in the past... i find it a little weird to wear your own companies shirt i guess ... but i will proudly wear this one... and it will probably make me hungry every time i put it on.... so what design is on the shirt??? well like most take out chinese food you are never really to sure what your going to get... the shirt design is a secret... is it chicken or cat.... or maybe a dragon... hmmm   i wont say... i will say the sticker design is not the design on the shirt.....so buy one and find out... 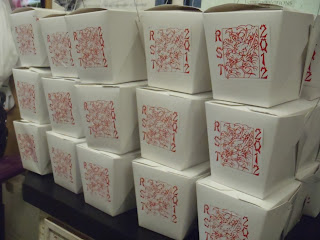 PRICE: the shirts are 30$ i make no apologies and sorry but no freebees

SIZES: i have small threw 2xl if you want another size please email me and let me know i will see what i can do if i decide to make another run of these

SHIPPING: many of you have inquired already about shipping... the only fair way for me to sale these shirts to not only locals but friends and customers out of town is offer them at the same time... so if you are out of town and want a shirt i do take paypal.... i will not except any orders before friday the 15th at 11 am... i will bring my computer to work and as i get notification from paypal i will pack up a shirt for you all shirts will go out monday the 18th... shipping charge will be 5 dollars a shirt making the total 35$ per shirt paypal is mattcicada@hotmail.com

AVAILABILITY: i do have a limited quantity of these shirts... if i sell out of them super fast i may consider doing a second run... i do not like doing 2 runs of the same shirt design but if there is a great demand i might think about making more since i like this design so much.... 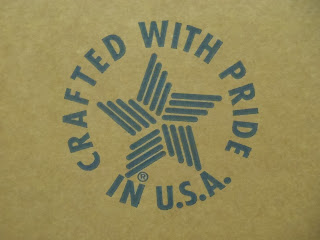 MADE IN THE USA: well haha on you china.... i take great pride in saying 100% of this shirt is made in the usa.....the shirt is 100% cotton made by american apparel (ya the super soft ones! just in time for summer) printed by local wichita legend phil ross ( and yes if you want to get shirts made i highly recommend him) so if you buy one you are not only supporting me and my family you are also supporting phil ross and his and also the fine americans that made this shirt... if you spend money with your neighbor it will come back to you ....... money spent over seas stays there.... i think its smart to buy local and support local business .... thanks everyone for your consideration and patronage
Posted by red sea tattoo at 10:58 AM No comments: